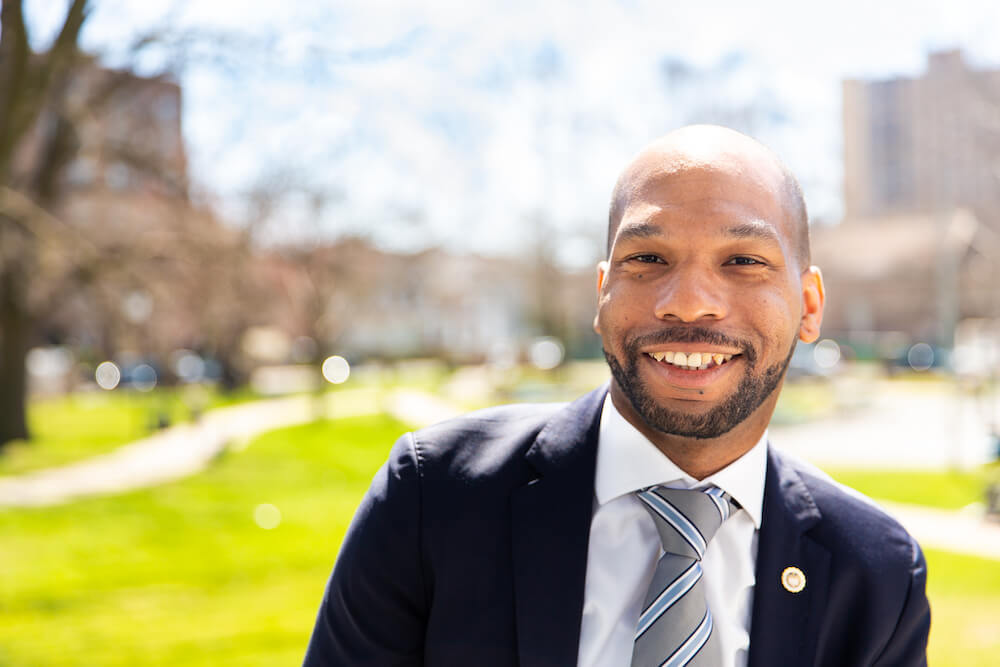 “You’re not just shoveling the snow in front of our house — you have to shovel the neighbor to the left and the right.”

The simple instruction above, passed down from his parents during harsh New York winters, turned out to be formative for Andrae Mitchell, a first-generation American of Grenadian heritage who grew up in Jamaica, Queens; and East New York, Brooklyn.

To be close to family, Andrae later laid down roots in Mount Vernon, where his partner and her family have lived for three generations. He’s dedicated to District 89 and committed to making sure every resident has the quality of life they deserve.

“They wanted to teach me the values of family and community,” Andrae says of his parents’ snowstorm lesson. “It’s important to be connected to your community; it’s important to embrace your family. And they’re one and the same, and that’s why we’re raising our family in Mount Vernon.”

Andrae believes that public service is a noble calling, and it was out of love for his community that he decided to orient his life toward being a servant leader, dedicating himself to building community and advocating for and creating a voice for young people. After spending a decade managing and directing community-based organizations, he’s running for Assembly to continue the legacy of the generations of working families and immigrants who worked to make sure the next generation had it better than they did.

“We’re here because previous generations have created something for us to stand on,” says Andrae. “So let’s continue building on that foundation. Let’s create the community our children deserve.”

That includes uplifting people who are often left out of the conversation in Albany: people like first-generation Americans, single parents, seniors, disabled members of the community, and overall, all those New Yorkers who work hard, pay their taxes and just want to raise their families in a safe, vibrant community where they have the support and resources they deserve. Andrae believes that government is at its best at work improving people’s lives, and would fight to pass Good Cause eviction protections, the New York Health Act, universal pre-K and childcare, and other policies that will finally invest in our communities the way they have long deserved.

Andrae knows that our communities are only as strong as our most vulnerable, and the best solutions come from within. As a member of the Assembly, he’ll prioritize uplifting the voices of those who are impacted most.

“I truly want to see our people go further,” says Andrae. “I feel that it is my responsibility to speak up for the people I don’t see in the room, because if we don’t advocate and we don’t make space with our privileges, then we are part of the problem. I want to show Albany that the solutions live within our community.”

Andrae took part in New York City’s Gifted and Talented program growing up, received a rigorous education, and participated in the Fresh Air Fund, a nonprofit that provides free summer vacations in the country to NYC children from low-income communities. His mother placed a high value on education and passed that down to Andrae, who believes education is the great equalizer and will fight in Albany to make SUNY free for all New Yorkers.

Since graduating from Howard University, Andrae has served several nonprofits focused on youth programming, including Oasis Children Services and Good Shepherd Services. Over his decade of experience as a manager or director of community-based organizations, he has worked to provide more opportunities to children like himself. Throughout, he has been recognized as a strong community leader for listening to people in the community to identify their needs. Time and again he has defied the odds by building programs from scratch to address those needs.

When funding was pulled from key public programs after the financial crisis of 2008, Andrae pivoted his experience to public policy. After working two internships — one with Good Shepherd Services in public affairs and policy, and the other for then-Public Advocate and current Attorney General Letitia James — while working odd jobs to make ends meet.

Andrae then worked with New York City to implement universal pre-K under former Mayor Bill de Blasio, and ultimately as a government official for the NYCDOE. During his time in City government, he identified trends to see where education was under-resourced and partnered with higher education institutions to develop certification programs for teachers to make sure children had the support they needed. This experience gave him special insight into the positive impacts of universal pre-K and its implementation, and he will fight in Albany to pass universal childcare and universal pre-K outside of the city so children statewide can benefit.

DONATE NOW
$5$15$30$50$100$200OTHER
If you’ve saved your payment information with ActBlue Express, your donation will go through immediately.